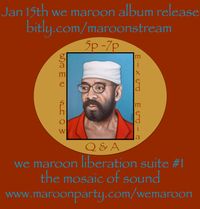 The Maroon Party For Liberation & The Cultural Committee of the Free Maroon Coalition will host a virtual album release of We Maroon Liberation Suite #1 : The Mosaic of Sound. An album dedicated to Russell "Maroon" Shoatz, marronage and maroons. Join us for performances, updates, Q&A, strategy session on next steps, political education and report backs along with fresh new music and art to liberate Maroon(s). An International Call to Free Russell Maroon Shoatz. He was just recently diagnosed with Covid 19 as well as having Stage 4 Cancer. He is an elder, grandfather, father, loving spirit of 77 years old. We are requesting that people throughout this planet earth consider doing an event in their locale every month until he is released and home with his family. Russell Maroon Shoatz is a political prisoner who has been held unjustly for over thirty years, including two decades in solitary confinement. He was active as a leader in the Black Liberation Movement in Philadelphia, both above and underground. His successful escapes from maximum-security prisons earned him the title “Maroon.” This is the first published collection of his accumulated written works, and also includes new essays written expressly for this volume. Despite the torture and deprivation that has been everyday life for Maroon over the last several decades, he has remained at the cutting edge of history through his writings. His work is innovative and revolutionary on multiple levels: • His self-critical and fresh retelling of the Black liberation struggle in the U.S. includes many practical and theoretical insights; • His analysis of the prison system, particularly in relation to capitalism, imperialism, and the drug war, takes us far beyond the recently-popular analysis of the Prison Industrial Complex, contained in books such as The New Jim Crow; • His historical research and writings on Maroon communities throughout the Americas, drawing many insights from these societies in the fields of political and military revolutionary strategy are unprecedented; and finally • His sharp and profound understanding of the current historical moment, with clear proposals for how to move forward embracing new political concepts and practices (including but not limited to eco-socialism, matriarchy and eco-feminism, food security, prefiguration and the Occupy Wall Street movement) provide cutting-edge challenges for today’s movements for social change.